It seems like everyone these days aren't satisfied with the way they look - their face, their shape, but most of all, their weight. Insecurities are normal, but some people take it to the extreme, and develop eating disorders. Those disorders include anorexia (the more common of the two) and bulimia. Because these are mental illnesses more rather than eating illnesses, people who develop these eating disorders see illusions when they look at themselves in the mirror and consider themselves "fat". 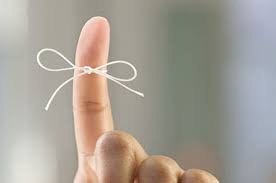 You probably know what anorexia and bulimia are already, but just in case, here's a quick recap:

Both are equally dangerous and unhealthy.

Unlike what most people think, developing anorexia and bulimia actually cause weight gain. Why? Let's start with the obvious. When you don't eat, you get hungry - it's normal. So when your body doesn't have food in it's system for a long period of time, you want to eat. People without eating disorders will go ahead and have a quick snack, but people with eating disorders will either starve themselves or purge out the food they eat. When you do that, your body remains hungry.

The same thing goes with vegetables, fruits, grains, dairy, and proteins as well.

If you have a serious eating disorder and you're reading this, and just took in what I just wrote - you're probably thinking something along the lines of, "Oh, well...then I should just quit eating completely."

If you do this, not only will you become extremely thin, frail, and sick, but you will gain weight nonetheless. This is science, and I don't have a full explanation for why this is, but think of your body having a weight range. If you weigh 120 pounds, your weight range will probably be around 110-130. So, if you quit eating completely, the most weight you're able to loose before going into a hospital is 10 pounds. Of course, there is ways of loosing more, but that's if you were overweight before you developed the disorder. (By overweight, I mean you were over 200 pounds. If you weigh under 130 pounds, over 11 years old, and female, you are p e r f e c t l y f i n e.)

Now, don't fret; there is a way of loosing weight, healthily. Below is a list of 5 ways you can become a healthier, "skinnier" you, without developing an eating disorder. Follow them strictly, and after a month or two, you should see results and even see that you are a happier person. 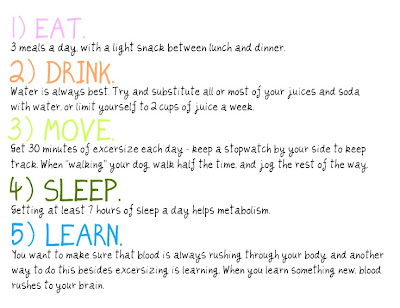 The 5 steps seem pretty basic, and you probably already know them, but do you actually follow them? I know I'm guilty of not doing at least one of these things each day myself. Let's all pledge to follow these rules for two weeks together!
Posted by Essie